The inshore bite is still hot. We have fished both Crooked Island and West Bay this week with some awesome results. Thursday Capt. Todd and I took Jim Wilson of Florida's Outdoors Adventures Television show on a late afternoon fishing trip into West Bay. The fishing started out slow but quickly picked up as the sun went down. We ended up boating several nice trout, a few Redfish and one Sail Cat all on top water. Everyone caught fish and the bugs didn't suck us dry until the last 15 minutes of the trip. It was great fishing with Jim again and hope we can talk him into getting up early one of these weekends so we can film a morning show.

I had the opportunity to fish with Dan Walsh on Saturday over in Crooked Island. Dan is one of the instructors with the University of Florida's (Panama City Campus) underwater crime scene investigation course. We also worked together way back when we were both instructors at the Navy Dive School here in Panama City. We got to the ramp around 5:00 am and on the spot 5 minutes later. The current was moving a bit and the schools of bait were just starting to show up. Top water was the lure of choice and we boated a nice limit of trout with one over 22 inches. We caught several Redfish in the slot limit and Dan boated a 29 incher after a long fight on light line. Somewhere around 9:30 am the bite slacked up a bit and we decided to hit the outside for some Pompano. I was lucky enough to spot Mike Gann a friend of mine from Georgia who had been doing pretty good on the Pompano for the last couple days. He was fishing with his cousin and his son. They gave us some pointers and a handful of custom jigs. With that we were set. The trick was to keep the boat just a little further than casting distance to the shore. I should also mention that Ladyfish and Jacks like the jigs as much as the Pompano. With a plain Pompano jig and about 45 minutes to maybe an hour we boated one large Jack and several Ladyfish along with 6 decent sized Pompano All the Pompano were legal and put a great fight. Thanks again to Mike Gann and Crew.

Capt. Todd had trips everyday of this long weekend and reported some great action out there in North Bay. He said the game plan was the same as last week. Start the day with the topwater plugs and be ready to switch as the sun comes up. He also got some use out of his favorite combo...the Cajun Thunder with the Gulp Shrimp. All in all his three day average was 4 to 5 slot sized redfish and 5 to 6 keeper trout a day. On Saturday the trout bite was allot better than average because he switched up early to the Cajun Thunder and pushed out to the 2 to 3 foot range and basically cleaned up on the trout. Now they had to weed through the small ones to get some keepers but they ended up catching some nice keepers.

On Monday he took a trip out to Crooked Island. He said he was one of the first boats at the boat ramp and ended up being the first boat out on the flats. He spotted a good sized school of redfish and ended up boating 8 nice redfish. Now folks here is the deal. I don't care if you make a million dollars a year and drive the best flats boat ever made. If you cut between the shoreline and another boat (40 feet from the shore, you know casting distance) your an idiot. If you have to cut right through an area that someone else is fishing to get to the only area you know how to fish...then you need fishing help. People there are thousands of redfish and trout out there. They don't all live in your favorite spot. If someone is parked in your spot you need to find another spot.

The morning bite is still really good. Topwater plugs are working well. Be ready to back that plug up with a spoon or soft bait. If the redfish or trout short strikes the plug drop the soft bait 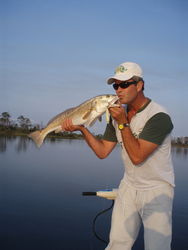 in right behind it. For those of you who sleep in, the late afternoon bite is on fire. I like to start with a spoon or a spinning bait and make the switch to topwater as the sun falls. For those fly fishermen out there clousers, streamers, and small body poppers with long feather tails (white) are working well on both the trout and redfish.

I would like to say thanks to all the service men and women who have given so much to this country. Just remember we can do what we do because of them. As always take care of the flats and have a safe trip on the water.