The last week or so the fishing has been great. The waters are about as warm as they are going to get and the bait is in. Most of the good fishing is taking place in the Morning and late Afternoon. The temperatures are down the winds are calm and the tide is usually moving.

Up on the flats the redfish are still biting on top water plugs, gold spoons and soft baits such as Berkley Gulp. I had a great trip on fathers day with a good friend of mine Ronnie Lawson. We ended up catching 20 redfish. Most of them were all around 24 to 26 inches with a few over 28. It was great fun. For those of you who are looking for the trout they are still biting as well. On that same trip I boated a nice 4lb trout on topwater. We had a nice size school of redfish grouped up in a small area of West Bay. We were able to keep our distance, make long cast and keep the school together while catching the redfish on the edge of the school. The whole time we were fishing this school there was a bass boat just on the other side of a grass Island watching us. It was crewed by Vick Martin and his brother. They showed good manors by not pushing in on us. Ronnie suggested we ask them to come on in and take a shot at the school, and they did. I got in their boat and one got in mine with Ronnie. To make a long story short they ended up catching a good number of large redfish. When the redfish are schooled up like that cast to the edge. If you cast into the school you will spook them.

Thursday I took Bo with Charter Boat Inc. on a Tarpon trip. Bo brought his long time friend Dan along with his grandson Josh. We spent the first hour catching live bait and quickly moved along the beach. We started seeing tarpon right away but they were out of range. We decided to move up the beach and closer to shore. As soon as we cut the engine we could see a group of seven or eight tarpon moving in on use. Bo and Dan both threw the their baits well ahead of the fish and let them come to it. Bo was rewarded with a hook-up and a 30 minute fight with a Tarpon that we estimate at around 100lbs. We got four or five jumps out of the fish and managed to get him next to the boat before he broke the leader.

Capt. Todd has had a couple trips this week as well. He was invited to fish with a friend of his Capt.Phil 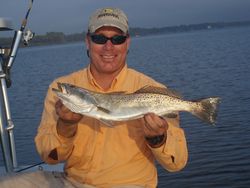 Hammond from Greyton Beach on a near shore red snapper and grouper trip. Capt. Todd says it was a great trip. They caught a nice limit of snapper and some really nice size grouper.

Capt. Todd also fished the same area we did on Fathers Day and ended up catching several nice trout and eight slot sized redfish. He likes to use the Gulp sinking minnow and fish in and around the grass islands in the marsh areas as the tide pours in.

He finished the week out with a early morning trip today. They put in at Crooked Island and he said the topwater trout bite was fast and furious until the sun came up. Afterwards they focused in on the redfish and ended up landing 6 nice spot tails.

Be sure to checkout this weeks photos on our website at www.backbayadventures.com
As always good luck on the water.