I know it has been longer than a week between reports but we have been
busy. The weather has been great. Although it has been a little windy from
time to time the temps are coming up and the fishing has been really good.

I would like to start this report with a little story about my fearless
partner Capt. Todd Jones. Now let me ask you a question. If you were to see
your friend get attacked by a shark in the surf zone would you go into the
same surf and look for the shark? No, more than likely not. Well lets
suppose you had a friend over at the house who was bush hogging your field
and he was to hit a Bee's nest and get stung up real good. Now would you
walk out into that field right up to that same Bee's nest and see what all
the excitement was about, especially after telling that same friend he was
being a big baby because he couldn't deal with a couple bee stings? No, more
than likely not. Well you guessed it...our fearless guide did just that. To
make a long story short I would like you to log on to our web site at
www.backbayadventures.com and see the picture that will tell the rest of the
story.

North Bay has been really good this week. The shoreline over by the airport
has offered some really nice relief from the wind and the trout and redfish
bite has been pretty consistent. Capt. Todd says that the trout bite in
about three foot of water is still producing some nice keeper size trout,
not to mention the occasional redfish, catfish, ladyfish and Jack. He has
ran a couple trips since our last report and has relied on the popping cork
to save the day in these windy conditions. He also reports some nice redfish
on the flats on the north side of the power lines in North Bay. He says to
look close to the grass during the higher tides and use a Gulp Sinking
Minnow rigged weedless. He was able to site fish for several nice sized
redfish that were laying up in the tall grass.

I have had several trips this week and we have been able to talk a couple
of really nice trout and redfish into giving up on top water. Of course I
had to use the popping corks a couple times as well. I can't tell you enough
how valuable of a technique the popping cork is. I had two trips this week
with kids, one I ran with Capt. Stan Cooper and the popping corks produced a
ton of trout with several over 18 inches. We also boated a couple redfish
using gold spoons, sinking minnows and topwater plugs. I had a fly fishing
charter on Wednesday with a friend of a friend who was interested in trading
a saltwater fly fishing trip for a freshwater fly fishing trip. He ended up
landing two keeper trout (both on poppers) and a 26 inch redfish. We also
landed a nice 15lb Jack with a topwater plug on 8lb tackle. That was pretty
cool.

The tides are up and the baitfish are in the bay in large numbers. We
recommend you try to go in the afternoon and fish until dark if possible.
The evening bite is on fire and as the sun starts to drop you need to be
close to a bayou or creek with a topwater plug. Fishing in the evening is a
better choice because the tide is falling, the bugs aren't as bad and the
temps are down.

The Tarpon have already started to show up. Now they are not the numbers we
are looking for yet but they are starting to show up. It won't be
long...maybe a week or two before we can really start targeting them.

As always tread lightly on the flats and good luck on the water. Be sure to
check out this weeks pictures on our website. 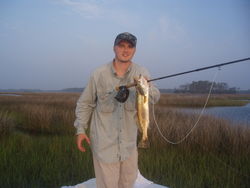