The top water bite for the redfish has been a little slow in the morning for the last week or so. For those of you who have been out on the water last week and parts of this week you may have noticed that the temperature has been a little cooler in the early morning. With the cooler temps and the heavy rains we have had for the last week or so the top water bite has slowed a bit...at least for the redfish. The early morning trout bite has still been pretty good. We have started to shift our focus to the falling and low tide this week. This has allowed us to spot the redfish by their tailing as they feed or by them leaving a wake in the water as they cruise the flats in pursuit of food. When you see this wake (sometimes made by a mullet) your best bet is to toss a soft bait well in front of the wake and lift it slightly as the fish gets close. If you spot a tailing fish toss the bait a little past and to one side of the fish a slowly move it toward the feeding fish.

This week Capt. Todd had a couple really productive trips for trout. On one of his trips he was able to put a couple youngsters on a good size school of trout that allowed his young anglers to quickly catch a nice limit of trout. He says he started them out using the Cajun Thunder popping corks and never looked back. Capt. Todd really seems to know were the trout are and what they are willing to eat. He has limited out on trout the last 7 trips he has taken.

I had a couple trips this week with some really good redfish results. Earlier in the week I took Capt. Rubin Lee from down in the Keys on a light tackle and fly trip. I have known him for years and its always good to have a fly fisherman of his caliber in the boat. We fished the high tide and were able to dig out a couple really nice reds. Capt. Lee ties a great looking shallow water fly called a copper liz. It's basically a combination of Malibu, squirrel hair, copper flash, spun deer hair and light weight eyes. It moves like a baitfish in the water and I can tell you for a fact it catches redfish. Yesterday I took Gregg Kurkland from Houston, Tx on a morning trip and we were rewarded with a couple of nice reds on top water and soft plastic baits. Although it was hot the sun allowed us to spot the redfish and get a couple bites sight fishing. I could go on all day about who is catching what but I guess we'll just let the pictures do that part. 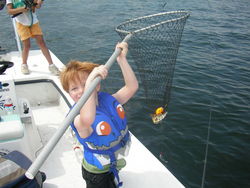 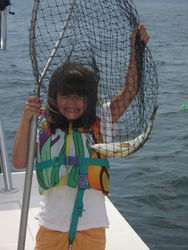 DUCK HUNTING IS CLOSE!!!! Here are a couple pictures from last years early season Wood Duck Hunts. We expect this year to be even better. Unfortunately we are completely booked until after January with only a few spots left. Call now for reservations in January 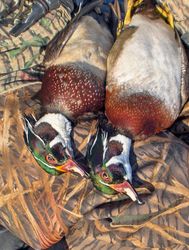 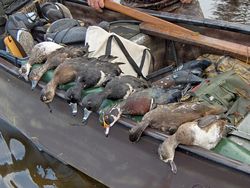