What a week we have had. We had the privilege of hosting the owner of High Country Archery and several of his crew as well as Amos Turner the host of Livin It Outdoors television show and his crew. They contacted us several weeks ago wanting to film a Bow Fishing show. Now I'm not much of a bow hunter but I know enough to know that its pretty hard to hit a target the size of a deer when its standing still. Now try that with a fish up to 30 foot away in 1 to 3 foot of water. What you need to do is take a bow and arrow and attach a fishing reel to it and you get the basic bow fishing set-up. As I would later find out bow fishing is harder than it sounds.

The first thing Capt. Todd Jones did after setting up this trip was to contact the Florida Fish and Game Commission to find out what species of fish are legal to take by bow fishing. He found out that on the inland waters where we would be fishing Stingrays, Sheep Head and Mullet were going to be our best bet. We contacted the crew and told them the species we had available. Both Capt. Todd and I requested that their crew only shoot what they were going to eat or use as bait. We do not want to go out and shoot fish for the purpose of shooting fish. Of course they felt the same way and we started working out the details. By the way Stingray makes a pretty good meal!

We meet the crew at Crooked Island Friday morning before the sun came up. It was like being at a sporting goods store. These guys had every kind of bow hunting gadget you could imagine. We quickly loaded them into the boats and headed out. The plan was to fish the first couple hours of the day until we had enough light to sight fish. Of course the day they arrive the weather went south on us. Well actually it went north, that is north winds around 15mph. With the winds whipping up the water it made the fishing a little harder but we still managed to boat 11 redfish and 7 trout on the first day. Top water plugs on choppy water always seems to work. We had to move around a bit and try to find areas where the tree line would give us a wind break. Around 9:30 am we shifted gears and picked up the bows.

Capt. Todd took his crew on one side of the lagoon and I stayed on the other. Within five minutes Richard from High Country shot the first Stingray of the day. Soon after Capt. Todd's boat with Nathan from High Country boated their first Stingray. With the winds blowing like they were spotting fish to shoot was hard at best but not impossible. Although they shot at several species of fish we were only able to land Stingrays. We boated 10 on the first day with a couple weighing in at around 40 lbs. On the way back to the boat ramp I spotted a huge school of baitfish getting hammered by Spanish, Blues, Trout, Sharks and lord knows what else. We pulled along side and everyone started throwing top waters plugs and jigs. I hooked and landed a large Blue and Capt. Todd's boat experienced a bit of excitement when he pulled a 3 foot Black Tip shark into the boat by the tail that Nathan had hooked up to. We could have stayed with that bait ball all day but we were running out of time. We had to head back to the hill. Capt. Todd did the honors of cleaning all the stingrays including the Trout and Redfish we had caught earlier in the day.

The second day the winds were a little better and the fishing was great. The top water bite lasted until 9:30 or so. We boated 7 red fish with several over 26 inches along with a nice bunch of trout. We also caught a couple blues, lady fish,spanish mackeral and one small jack. The bow fishing wasn't as good as it was the first day but we still boated a couple. I want to tell you that shooting at Stingrays and hitting Stingrays are two different animals. For those Stingray lovers out there you will be happy to know that of the 60 or so we saw only 12 made the dinner table. They can move pretty darn fast when they want to.

The morning bite for top water is still outstanding. We recommend trying top water plugs or a Cajun Thunder popping cork rigged with a Gulp 3 inch shrimp at first light. As the sun comes up you may want to have a spoon or jerk bait at the ready. As the sun comes up you will be able to spot the redfish and trout holding up in the prop scares and potholes. If you can maintain a slow drift and low profile you are almost assured a hook-up with one of these two game fish. Don't be afraid to fish right out in the middle seeing how Crooked Island has a shallow depth of water throughout most of the area until you hit the middle of the sound. Look for the schools of baitfish that frequent Crooked Island. When you do find the baitfish schools have a top water and a lure that will sink so you can get the fish not only on top but also the one's that are holding the bait ball together from the bottom.

Crooked Island has miles and miles of shallow water flats that may reach up and grab your prop so if you aren't sure take it slow. If you think you may want to go out and try your luck at bow fishing, gigging or spear fishing be sure you check out the current Florida fishing regulations for what species you can legally take.

As always be safe on the water. Check out this weeks photos at our web site www.backbayadventures.com. Good luck on the water. 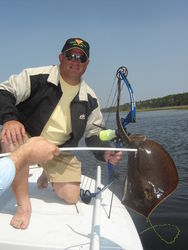 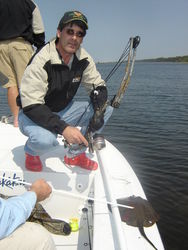